We had a family picnic in the garden today when Father announced he was going to build a Hob house! Mother thought he was being ridiculous and that the family story of Great, Great, Grandmother Lilla was not true! Father was upset and told her that he saw the Hob as real as she was to him! I think it is a marvellous idea and discussed where the Hob house is going to be built. We concluded the large grass area adjacent to the vegetable garden is perfect!

I am a wanderer in the woods, a traveller on the moors, the only path I see is the one I make. Behind me, I leave nothing but a ripple of discovery" - L Jeffrey

The book is now available on Amazon Kindle – UK and the US.

Follow the adventures of Ipp, a brave and friendly Hob who lives in an old woodland. Hobs are wonderful creatures who look like fairies but without wings! Ipp discovers the mysterious Hob Hill one night, setting off a series of adventures discovering new creatures and friends who share the forest with him. Ipp’s view of the world changes when he discovers the edge of the woodlands, and the land of the Tall-Ones.

This heart-warming tale of friendship and exploration is inspired by nature and the unseen world. Hob Hill is an enchanting family book to read to younger children, or for those starting to read chapter books, and older.

To view some of the artwork and for further details, click here. 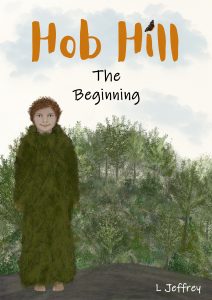